Chapel Hill, North Carolina, is a small-ish college town with a population just over 60,000 - and that’s without counting the students who attend the University of North Carolina’s flagship campus, adding another 29,000 or so to the total population!

Although much of life here is linked to the university, you are easily able to enjoy all the cultural, sports, and outdoor opportunities in the greater Triangle area.

Franklin Street is the social center of the University as well as the town of Chapel Hill, with more than 200 restaurants, bars, and retail shops. Known for its nightlife and culture, Franklin Street also features the Morehead Planetarium and Science Center, the Ackland Art Museum, and small music venues like the Cat’s Cradle and Carrboro Arts Center.

Chapel Hill was named “America’s Foodiest Small Town” by Bon Appetit Magazine and a quick look at the diverse dining spots on Franklin Street gives a hint as to how this title was gained. In a few short blocks, diners can choose one of Gourmet’s Top 50 Restaurants in Lantern, an Asian fusion restaurant from James Beard award winner Andrea Reusing. They can dine at what some consider to be the best Italian restaurant in the Triangle, Il Palio.

Franklin Street also happens to be the center of local historic districts in Chapel Hill, where in just a few blocks walk, you can be transported back to architectural styles from both the 19th and 20th centuries. 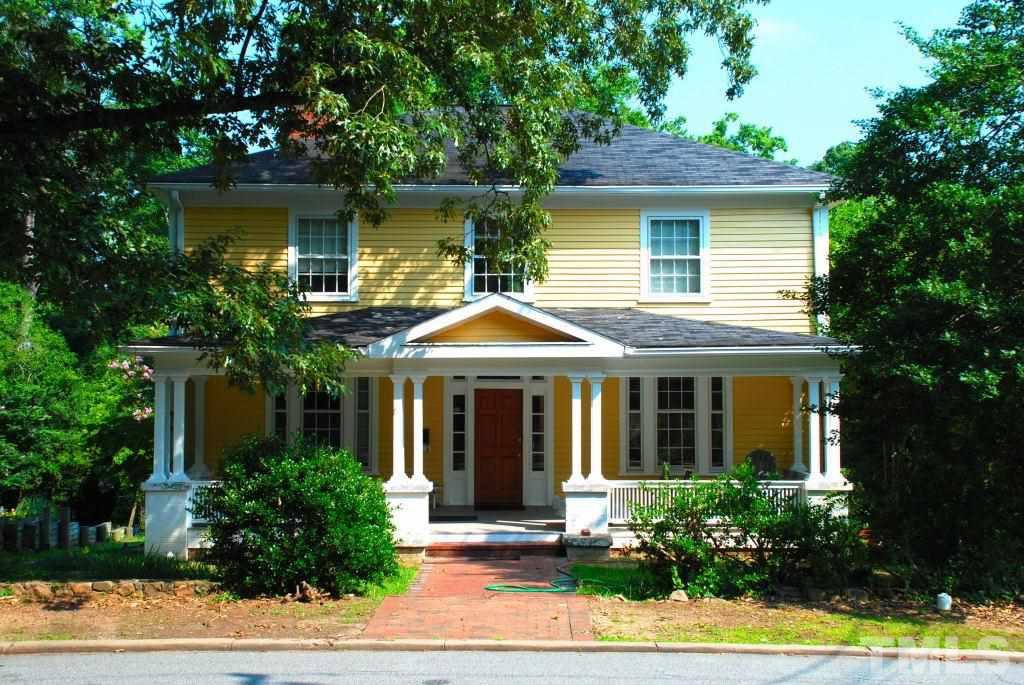 The three local historic districts are Franklin-Rosemary, Gimghoul, and Cameron-McCauley. Each is primarily residential and each borders a different area of the UNC campus. Many homes have been updated with modern conveniences - air conditioning and high-speed internet - while maintaining the charm of the past. All three feed into the well-regarded and nationally-ranked Chapel Hill-Carrboro school system. 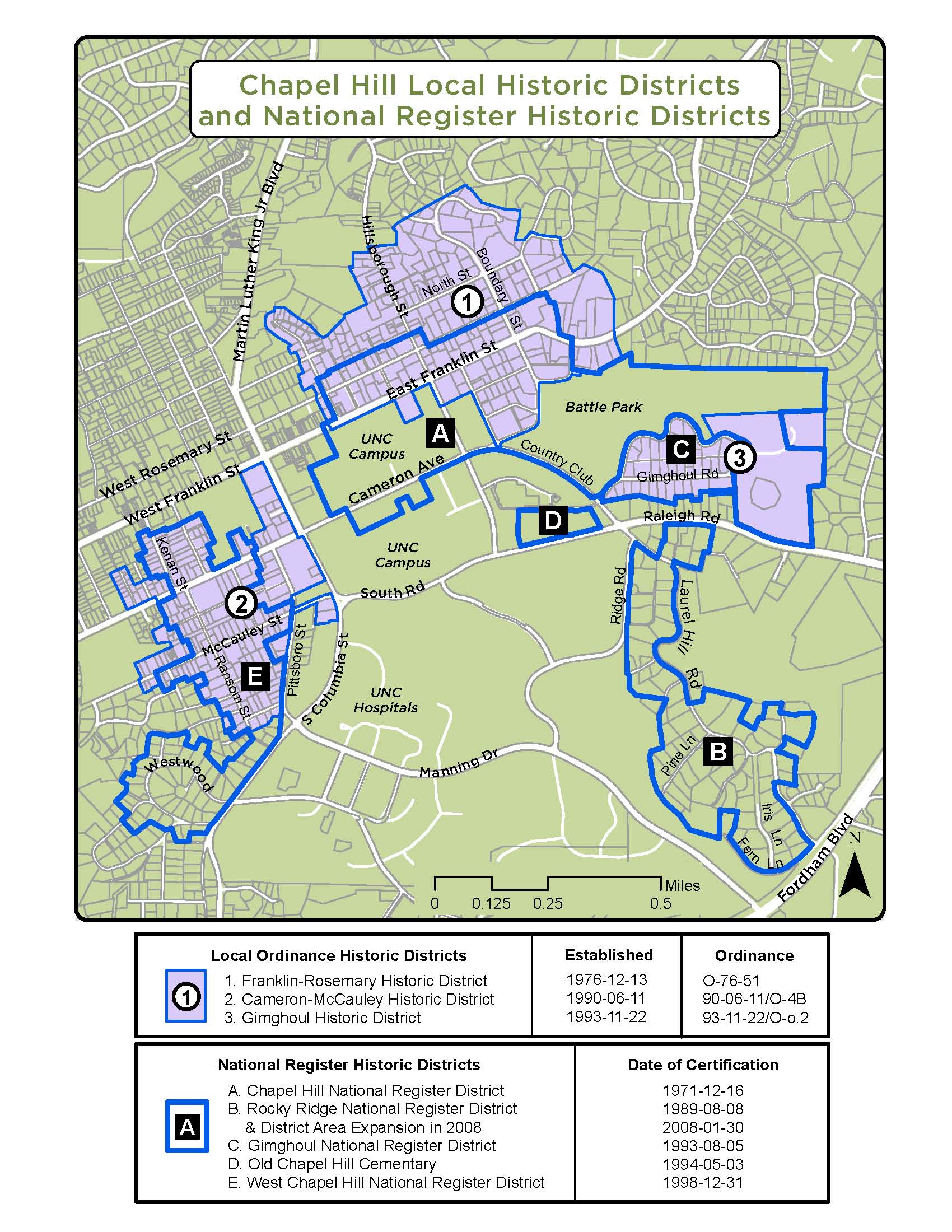 Franklin-Rosemary is the oldest of the three local historic districts and its architecture features Federal and Greek Revival, along with Queen Anne, bungalows, and Colonial Revival. Wide and deep porches, a mature tree canopy, and low fieldstone walls unify the neighborhood.

Many of these historic homes are within easy walking distance of campus and of Franklin Street, where you can enjoy fine dining, shopping, arts, and live music.

Franklin-Rosemary generally has the highest-priced homes in the historic areas ranging from the $800,000’s and up to multi-million dollar properties.

Cameron-McCauley is west of the UNC campus with easy access to the campus and Franklin Street. This historic district was developed throughout the 1940s primarily for UNC employees and professors. Many homes in this neighborhood are set back off the street - the main styles are bungalows and popular 20th-century styles such as Craftsman, Colonial Revival, and Tudor Revival. The homes in this area have smaller lots but feature lush greenery, gravel paths, and low stone walls.

There are homes in this area that have been converted into condos and it’s possible to find 1 bedroom places under 1,000 square feet for under $300k. Homes with 2-3 bedrooms and more than 1,600 square feet can be found starting around $400k, and the largest homes in the area, 2500+ square feet, 3-5 bedrooms, start around $800k and can be found at 1+ million.

The third historic district is Gimghoul Neighborhood Historic District, which was a development of 37 houses built in the 1920 and 30s as faculty housing. Located across Battle Park and southeast of Franklin Street, Gimghoul is perhaps best known as being the product of the secret Order of the Gimghouls, a fraternal organization of UNC undergraduates, faculty, and alumni.

Most homes here are Colonial Revival and although they have been renovated inside, their exteriors have not changed much since the 1930s. And there’s a castle, a French-style chateau that sits at the top of Gimghoul Road and comes complete with a ghost story of a love triangle, a duel, and a bereft sweetheart. (It is, however, privately owned, so there are no tours!)

The rugged topography of this neighborhood sets Gimghoul apart, built along a ridge with a dramatic overlook of Battle Park forest. Winding roads, a dense tree canopy, and lush landscaping are prevalent here. Most homes in this neighborhood are Colonial Revival in style, and although they start in price around $600k, they can range over $2 million.

It’s worth noting that one of the reasons many of these historic district homes are so expensive is that they are one-of-a-kind, so although they may belong to a certain school of architecture, they were customized with the finest millwork and interior fittings, gleaming hardwood floors, a mix of formal and informal interior spaces, and spectacular gardens.

Come on over and check out this wonderful cottage within walking distance to Keenan Stadium, Carolina's campus, & everything else downtown Chapel Hill & Franklin Street h...

Wow! What a gem! This home is within biking distance to UNC campus and all that Franklin Street has to offer. The outdoor space is gorgeous sitting on just about an acre ...

This charming 1910 cottage is in the Franklin-Rosemary neighborhood, 3 blocks from the UNC Campus. Configured by a prior owner as a 2 BR/study/1 BA home with a studio apt...

Rare development opportunity this close to downtown and UNC! 1.18 acres at the end of a quiet street waiting to be utilized! Develop into small lots or multifamily. Price...

So many possibilities with this property! 15.847 acres of property and surrounded on 3 sides by US Army Corps Land on Jordan Lake. Property features 3 separate fields, 2....

An oasis in the heart of Chapel Hill! You will not believe you are in downtown Chapel Hill when you arrive at this setting. Almost an acre with mature landscaping and e...

With only eight units in the building, it is rare for a McCorkle Place condominium to come on the market – especially one with such a terrific floor plan. The layout of t...

Extraordinary 63 acre property that is 5+ miles to Carrboro town limits. The best of both worlds. Original farmhouse was renovated in 2004, yet retains all the charm of...

Hark the sound...incredible opportunity to own this priceless gem on beloved Franklin St in the prestigious Historic District of Chapel Hill & adjacent to UNC campus. Cla...

Step into a sublime example of Carolina history to experience the character and charm of this 1925 colonial nestled in a 1.54-acre oasis on Tenney Circle in the heart of ...

Looking for a Specific Design in Chapel Hill?